ST2 In Session No. 2: TAIKI NULIGHT

Sample Tools by Cr2 presents to you ST2 In Session, a brand new series consisting of exclusive Q&A’s with featured artists. ST2 In Session is especially designed to give you a deeper insight into how artists go about their productions, and how they cope with obstacles along they way during their music creation. In our second issue we have invited production prodigy Taiki Nulight to take us through some of his production processes and how he looks froward to being on the road again.

Taiki NuLight is currently one of the most in demand artists in his scene. DJing and Producing for many years, and being influenced by UK Garage, House and EDM, he has created a trademark sound which is truly his own. With his string of releases including ‘Back 2 U’ Taiki Nulight has taken the electronic circuit by storm with a prized signature sound which has placed him firmly on the radar of key tastemakers including Annie Mac, Diplo, Pete Tong as well as some of the UK’s biggest producers such as Low Steppa and Chris Lorenzo and AC Slater. Most recently releasing the energetic track, ‘To You’ featuring mesmerising vocals from Jem Cooke. 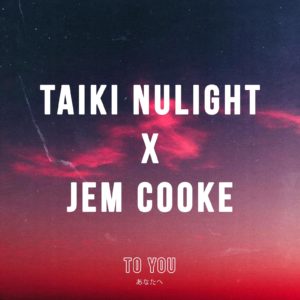 1. Hey Taiki! We’re absolutely loving the new release ‘To You’ with Jem Cooke, great to have you with us today for a q&a! First of all, we always like to start by talking a bit about how the record came together. What inspired you for this track, and how did you come to link up with Jem, did you two work together in the past?

Thank you and good to be here! I had always been a big fan of Jem. She was really into a previous record of mine called ‘Back 2 U’. After the vocals came through I knew exactly what kind of vibe it needed to be, so it all kind of fell into place by itself really.

2. The vocal really adds something extra to the track, and compliments it perfectly. Did you encounter any challenges in getting the vocal to really fit the track, and do you have any tips for aspiring producers, or things to look for, when trying to get vocals to work well within their own productions.

I wanted her vocals to be the spotlight of the record. Easier said than done. Mixing her vocals was much more difficult than I had anticipated because I wanted to do her vocals justice since she has an incredible voice. However, it became a constant battle between having it too loud and harsh or too quiet and soft but after months of trial and error I think I finally got there! I think my advice would be to not overthink too much and referencing as many different speakers/headphones as you can to gain perspective.

3. The track has quite a dark yet energetic vibe, how where you able to balance all the elements in the track to achieve this? Which element(s) do you think is/are vital in giving the track it’s unique feel?

Besides the mixing, creating the music around her vocals was super fun and came about really naturally. I just followed my intuition. I could hear exactly how I wanted to sound in my head the whole time. I learned a lot from this project.

4. The drums sound really cool and authentic in this track, we’ve noticed you’ve gone for a similar sound in some of your other releases. Do you tend to sample your drums or are they recored? and what processing techniques have you used to give the drums that nice crunch and high end sparkle?

I definitely, unconsciously, gravitate towards a certain style and sounding drums. It’s just what sounds good to me I guess. I use a lot of UAD stuff for all my top end so definitely check those guys out.

5. You have a lot of really original sound design in your tracks. How do you go about creating unique sounds? Are you someone who works with analogue gear a lot, or do you prefer working with digital synths and plugins?

Sound hunting is a good skill to hone, I think. Doesn’t necessarily have to be sound from music. I’m constantly on the lookout for quirky sounds which I can then later write into a track and make it sit musically. I definitely use both when it comes to analog and digital. I wish I could say I know what I’m doing when it comes to both sides of it. Like, I guess I know what I’m doing but I am nowhere near the best at it. I still have so much to learn and to hone.

6. A lot of producers tend to struggle with finding their ‘sound’ and sticking to a certain direction with their music. Now you’re a producer who’s touched upon a number of genres; bass house, tech house, and even some more chilled out deep house, to name a few. So, what would you say is important when producing in different genres, and how do you get into the zone? Does your approach and production process differ for each genre?

I think having a healthy music taste and what I mean by that is to not pigeon-holeing yourself into listening to the same genre all the time. Like with anything, you have to keep falling over. Over and over again until you eventually don’t. Trial and error.

7. You’ve already collaborated with some big artists including Tchami, AC Slater, and Chris Lorenzo. Are there any dream collabs that you’re still waiting to make a reality?

Right now I just want to focus on improving. Working on areas of myself that I’ve ignored throughout my career. One by one. I generally like to collaborate with friends, and the music we make ends up being a by-product of our friendship.

8. Finally, with everything going on the world right now, it seems the live music industry has been put on halt for the foreseeable future. However, with a slightly more optimistic perspective, what are you most looking forward to when things get back to normal?

I miss travelling so much. I miss meeting new people and travelling to places I’ve never been before. I miss loud speakers and testing records I’ve made on the road. So fingers crossed 2021 this will be all over!

You can also purchase a full year of the service for only half the price: Platinum Producer Pro – 50% Off!

Having joined forces with the music industry giant Mousse T., Sample Tools by Cr2 is proud to present the next colossal sample pack in our exclusive Artist series. Introducing: MOUSSE T. VOL. 1 – PRE-ORDER NOW FOR ONLY £19.99 AND RECEIVE YOUR DOWNLOAD ON NOVEMBER 30TH! Customers who pre-order will be invited to an exclusive online live production session with Mousse T. himself.